In a visit led by photo journalist Jon Moyer and music products industry insider Josh Vittek; products, hope, and a surprise visit were given to a family doing remarkable things to help their community recover from the 2010 earthquake. Dean Markley donated a lifetime of bass strings, shirts, wrist bands and glow in the dark, guitar shaped lapel pins for children in the community, and Cort Guitars donated an Arona 5 electric bass and EARTH100 acoustic guitar. Hartke provided a new A25 combo bass amp. 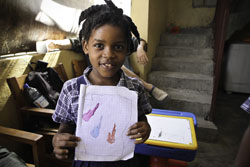 The visit was spearheaded by Moyer, who went to Haiti in September 2010 after hearing about a Pastor of a church that was doing remarkable things to help his community recover from the earthquake. Running a church out of a building much smaller than an average home, Pastor Pierre and his congregation have committed to raise and support twenty orphaned or homeless children from the earthquake. After learning that the Pastor’s son, Bekenson, was a big fan of Victor Wooten, Moyer and Vittek committed to bringing Wooten and the power of music to help inspire and heal this amazing community, and to surprise Bekenson with a visit from his favorite musical hero.

The visit was documented and resulted in the film Haiti 10, an incredible story of faith, love and the power of music helping a community rise above the horrific 2010 Earthquake. The Haiti 10 film crew consisted of Jon Moyer (Director), Josh Vittek (Producer), NAMM’s Pete Johnston (Director of Cinematography), Kindra French (Co-Producer) and Joe Brandi (Co-Producer). Haiti 10 will be released in August 2012, premiering in California and New York. View the trailer for the movie: