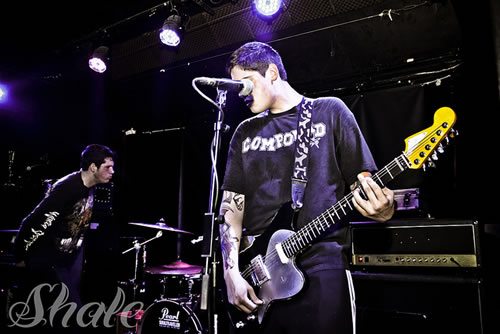 Rock & Roll with Integrity Allee Futterer… For centuries we’ve faced the struggle of teen angst… dealing with parents who don’t approve of our clothes, hair, make up, music, friends, etc. While some have argued that rock and roll is dead I simply beg to differ.

Growing up in a niche market such as the hardcore scene, my friends and I went to multiple shows a week, chanting along with the singers of these bands until our voices were gone. We idolized bands like Minor Threat, Bane, Gorilla Biscuits, and Ceremony and centralizing our values around straight edge or abstinence from drugs and alcohol. Though we did have our fair share of getting into trouble, we made our mark on rebellion in a different way.

A few weeks ago I went to go check out Twitching Tongues, a friend’s band that I grew up with. While we were standing outside the venue we saw that this community hasn’t change. All the boys were wearing the exact same outfits that my friends wore and all the girls were acting and dressing alike, just with posh British accents. While many musicians are struggling to get people to attend their shows, this scene embraces its sense of community and supports the local music as well. This became more transparent when Integrity, a legendary band who came to London on the same night as the England vs. Germany Euro match; while nearly every Englishmen was at the pub, the local acts opening for Integrity still had a significant crowd that was supportive.

During Integrity’s set at the Underworld, a big Camden venue, there was no shortage of crowd surfing, people stealing the microphone, moshing and unity. Not to mention Integrity’s invigorating music and progressive approach to a relatively old school style of punk. It’s a feeling almost anyone could get behind, knowing that everyone around you is there to feel the same way and to have just as much fun. With such an oversaturation of music and multimedia there is a lot to be said for a band and a genre of music that is actually crowd focused and engages the audience in a holistic manner. Whether or not bands like Twitching Tongues or Integrity make you rock, the fact is that they do rock it.

In the age of EDM and dub-step, finding a rock star that plays rock and roll can actually be a bit of a challenge. I’m talking about the Steven Tyler’s and Jimmy Pages who had no problem stripping down and showing the world just how badass they really were. While hardcore bands are desperately trying to keep that alive, I thought mainstream media was missing that aggressive, punchy “I don’t care” attitude until I saw a band called Findlay play last weekend at Lounge on The Farm Festival in Kent, UK. Their singer, Natalie Findlay, is a serious ball of fire that doesn’t mind throwing down.

With no shortage of energy from their drummer Seb Skillings or guitarist Ben Simon they held it together and were my personal favorite part of the festival. Being a bass player, when I got the chance to interview Natalie, the band’s front woman. I of course had to ask why they were bass-less; with a cigarette in hand she said, “Because bass players suck!” Touché Natalie. If that’s not a controversial statement, I’m not sure what it is!

Pressing the matter I asked, “No bassist? Say what! Why?” Natalie commented, “Everyone was rubbish, we need someone who can hang.”

Point is these Londoner’s are here to put the rage back inside today’s youth and fill our hearts with sexy, dark melodies and epic guitar solos that you won’t find in a Drake beat.